Women in Science with L’Oréal

We believe fostering female scientists of the future starts much earlier in life, which is why, to mark the tenth anniversary of L’Oréal’s For Women in Science, we’re linking with L’Oréal to inspire women in science.

Working with the L’Oréal team, we’ll be pairing inspirational women in science with primary schools, to help instill a love of the sciences at a young age, and to excite them about the possibilities of a science-based job.

Because by encouraging more scientists into schools and opening children’s eyes to the range of careers that science leads to, we can help bring those possibilities to life. By introducing young girls to female role models working in science, we can help make scientific jobs feel both exciting and attainable. 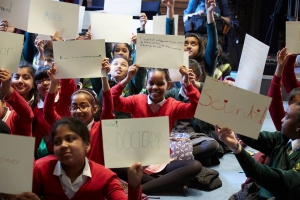 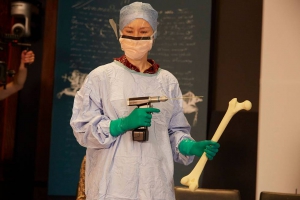 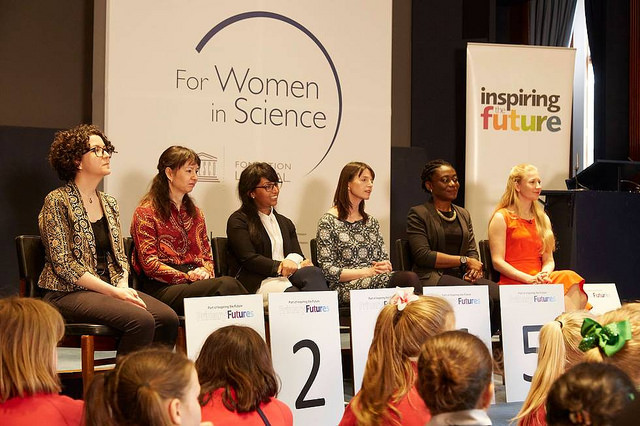 “Role models from the world of work can have a big impact on children – they can help them see why the subject they are studying matter. It also helps to tackle the stereotypes children have from a young age which lead them to think that certain subjects and careers are not for them. We know that children from the age of 5 often stereotype the jobs people do according to their gender – and this is particularly the case in science. That is why we are keen to get more volunteers who work in science to volunteer an hour of their time to visit a local school and chat to young people about their job and career route.”

How can you help?

The main aim of the campaign is to encourage women with a job that uses science in any guise, to volunteer in a local primary school. Anything you can do within your networks to encourage this, will help us all inspire more young female scientists.

Now is your chance to get involved. Sign up to Inspiring the Future to help inspire the next generation of women in Science. Don’t forget to select ‘L’Oréal ForWomenInscience’ to let us know how you heard about us.

See photos from the campaign launch.

On Thursday 20th October over 30 volunteers came together to raise awareness of Inspiring the Future in Cambridge. With more than 300 pupils in attendance, the aim of the event was to help introduce young people to the technology and creativity sectors, and raise their aspirations about the paths they can follow. There were a series of Inspiring Women master classes run by Prof Dame Athene Donald DBE FRS, Emily Jupp – Designer and Owner of Milly J Shoes, Dr Helen Watson, Fellow and Director of Studies in Archaeology and Anthropology, St John’s College, Jane Paterson-Todd, CEO of Cambridge Ahead, Dr Dana Galili, Research Associate Medical Research Council’s Laboratory of Molecular Biology and Isabel Napper, a Technology Lawyer. We were delighted to partner with Form the Future to run the Inspiring Women master classes. Co-founded by Anne Bailey and Michaela Eschbach, Form the Future is a social enterprise connecting schools and businesses in the Cambridge area to deliver Signpost 2 Skills for the Greater Cambridge City Deal. 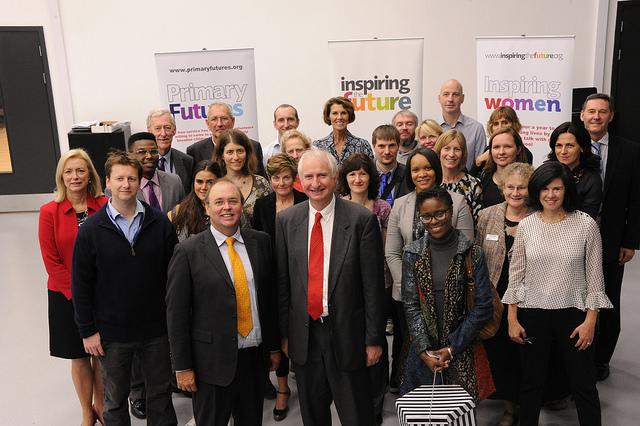 Inspiring Women in the Arts Business with Sotheby’s

The Inspiring Women campaign teamed up with Sotheby’s to show girls in state schools and colleges the range of careers available in the sector. Over 50 girls aged 13 – 18 had the opportunity to meet 11 women doing different roles, and ask questions about their jobs and career experiences. The event took place at the iconic London HQ of Sotheby’s, one of the world’s leading fine art auctioneers. Women continue to make an outstanding contribution to the arts sector in a varied range of roles, including artist, gallery director, finance manager, art history expert, and many more. 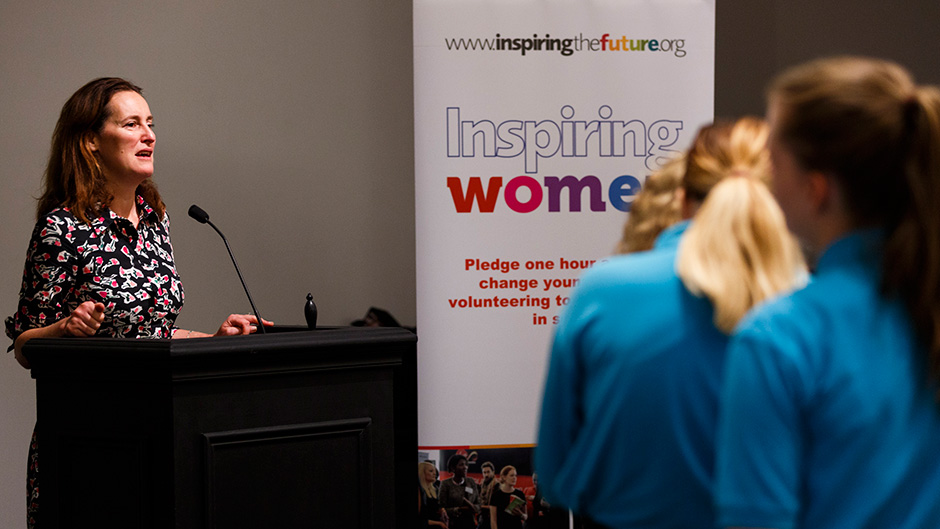 125 state school girls had the opportunity to participate in a career speed networking event with high profile women in business and enterprise at London Stock Exchange Group (LSEG) and had the rare opportunity to participate in the iconic market opening. The event was hosted by Xavier Rolet, CEO, London Stock Exchange Group and Air Vice-Marshal Elaine West CBE, Trustee and Ambassador of the Inspiring Women Campaign. Speed networkers included a range of high profile women from the Business and Enterprise sector, from organisations such as Bank of American Merrill Lynch, Virgin Money and Goldman Sachs. 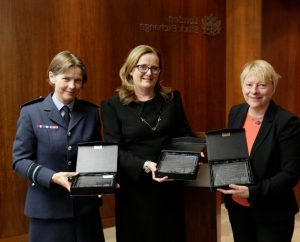 On 18th March 2016 the Inspiring Women Campaign teamed up with English National Ballet and Sadler’s Wells theatre to show girls in state schools and colleges the range of careers in the dance sector. 100 girls aged 13 – 18 did ‘career speed networking’ at Sadler’s Wells with women working in different jobs across the dance sector. For centuries women have been the face of dance on the stage but there are numerous other jobs to which they can aspire in the sector. Surprisingly, women have been notably absent in certain key roles such as choreography. 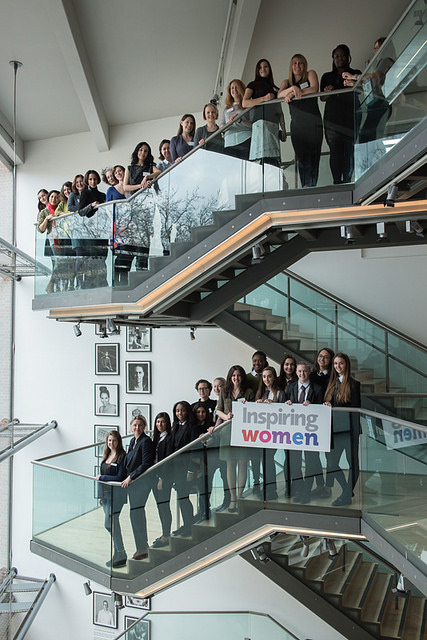 Inspiring Women in Defence – pilots to medics – motivate at the MOD

The Inspiring Women campaign in partnership with the Ministry of Defence hosted a flagship ‘career speed networking’ event on 12 January at the MoD headquarters in Whitehall London. There were 25 women representing a wide range of careers in the defence industry talking with 100 state school girls about their jobs and experiences. Minister for the Armed Forces, Penny Mordaunt, MP opened the event and took part in careers speed networking. The even was closed by Air Vice-Marshal Elaine West CBE, the highest ranking female in the British Armed Forces. 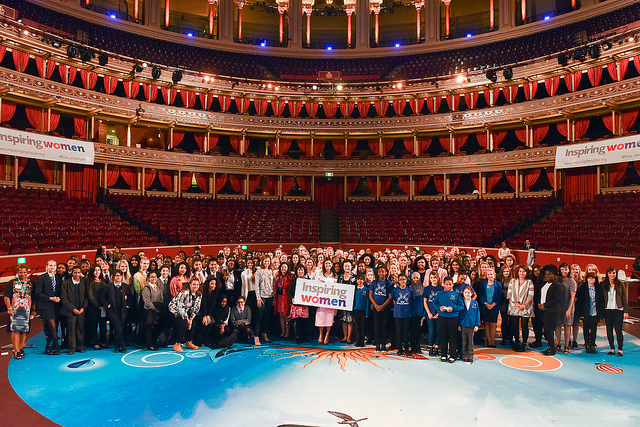 On 2 July 2015 Miriam Gonzalez Durantes spoke about the Inspiring Women campaign at an event organised by 100 Women in Hedge Funds which took place at the London Stock Exchange. 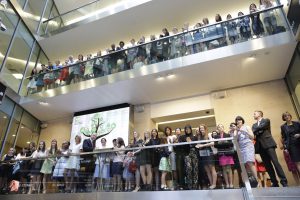 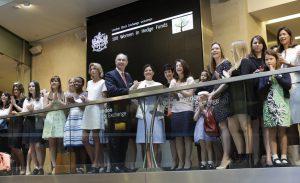 On 19 May 2015 the Inspiring Women campaign and BAFTA have teamed up to host a BAFTA Young Game Designers workshop and speed networking event for girls to inspire them to consider a career in the games industry. The event was with 60 pupils from Skinners Academy in Hackney. Women from the games industry explained the various careers available and gave feedback on the young participants’ own game ideas, which they can enter into the nationwide BAFTA YGD competition in association with Nominet Trust. 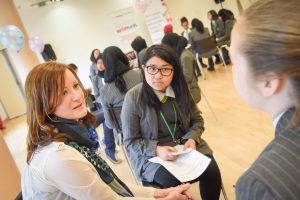 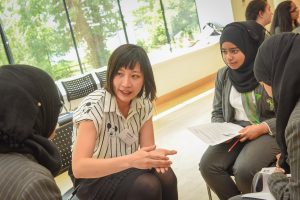 ‘Inspiring Women in the Arts’ in partnership with BAFTA

On 23 April 2015 Tate Modern’s Turbine Hall hosted ‘Inspiring Women in the Arts’ in partnership with BAFTA. 170 high profile women representing a wide range of careers in the arts did career speed networking with 850 state school girls.

The event also announced meeting our target to recruit 15,000 women to volunteer!

Now 15,049 Inspiring Women have signed up through Inspiring the Future to be available to speak in state schools and colleges about their jobs and careers. Since the campaign launched in October 2013, a total of 289,974 girls and young women from across the UK have engaged with Inspiring the Future volunteers. 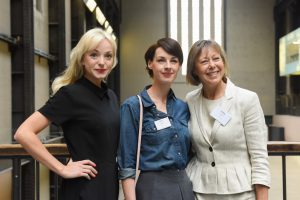 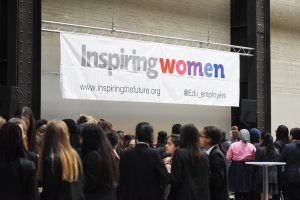 The event was on board HQS Wellington, the last surviving Second World War escort ship in Britain. Moored at Temple Stairs on the River Thames since 1948, she is the Headquarters of the Honourable Company of Master Mariners. 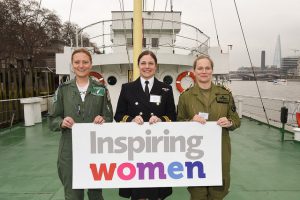 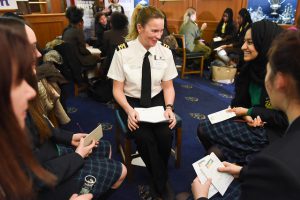 This event near London’s self-styled Tech City is part of the wider Inspiring Women campaign. 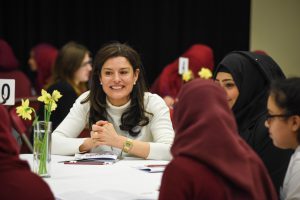 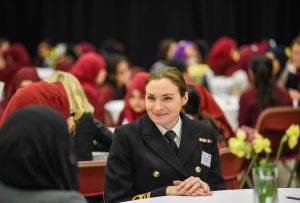 Backed by principal partner BT Sport and also the British Olympic Association and the Department for Culture, Media and Sport, Inspiring Women called upon females working in this sector to pledge one hour a year to talk with girls in state schools nationally about forging a career in this traditionally male dominated industry.

More career speed networking sessions took place across the country during Inspiring Women in Sport Week – 23 February to 1 March 2015 including events at BT Murrayfield rugby ground in Edinburgh and the National Tennis Centre in west London. 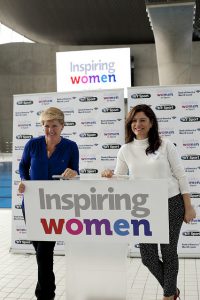 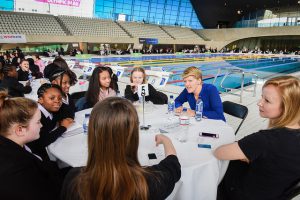 Inspiring Women in Sport launched at the BT Tower

Backed by BT Sport, Inspiring Women in Sport called upon females working in this sector to pledge one hour a year to talk with girls in state schools nationally about forging a career in this traditionally male dominated industry.

As a curtain-raiser for the campaign, 30 schoolgirls from Queensmead School, Hillingdon participated in a one hour ‘career speed networking’ session at the top of BT Tower with influential women from sports governing bodies, professional athletes and sports media.  The launch announced Inspiring Women in Sport Week – 23 February to 1 March 2015. 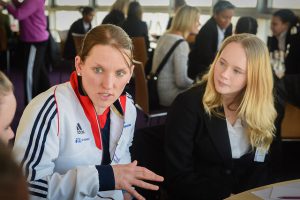 Inspiring Women in Finance at the Bank of England

Mark Carney, Governor of the Bank of England and Financial Times newspaper Editor, Lionel Barber, spoke about their increasing commitment to diversity and why a number of their female colleague were taking part in this event. 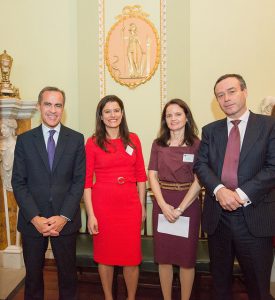 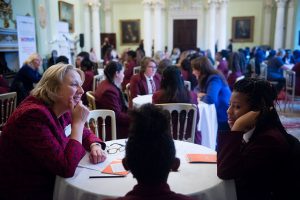 The aim of this event was to demystify the ever popular fashion industry and show the wide range of roles to which young girls today can aspire – from design, to manufacturing, to marketing, to retail. Looking behind the glitz and glamour to the real jobs available to the enterprising. 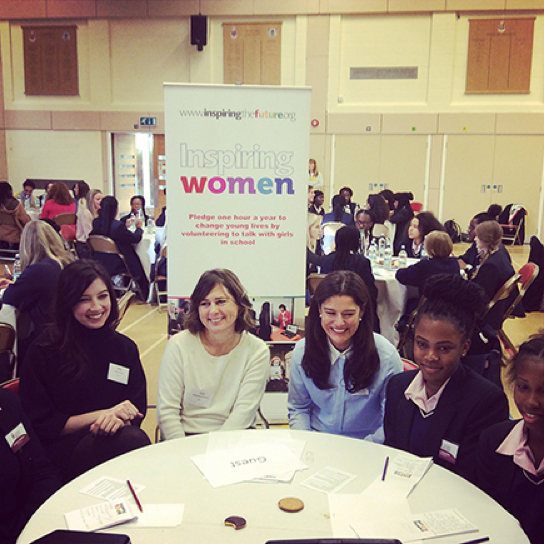 On 6 October 2014, New College Lanarkshire hosted the Inspiring Women in Scotland launch event. Ten senior women from government, public and private sectors, and the arts took part in a speed career-networking event talking directly with 100 young girls about their experiences, their job and how they got there. Schools and colleges in Scotland can now find diverse volunteers to talk jobs, careers and life experiences with their students. 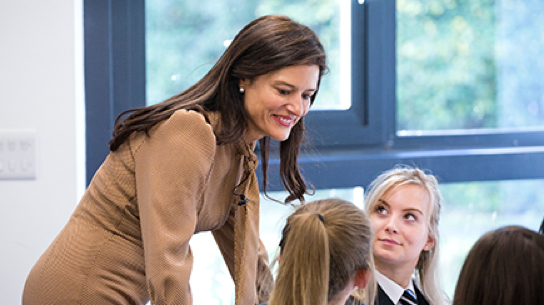 Inspiring Women with Aston Martin at Tile Hill School, Coventry on 2 July 2014. Women doing diverse jobs at the company drove the latest model Aston Martin cars on to the school playing field, then did career speed networking with 100 girls. Aston Martin Lagonda Ltd is a luxury British sports car manufacturer based near the school in Coventry. 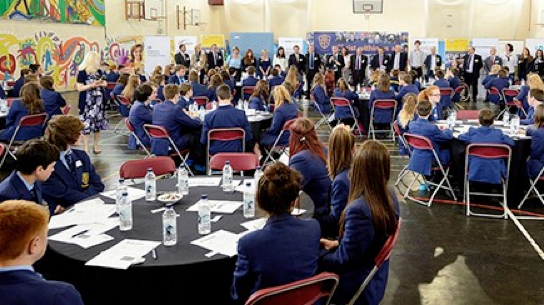 Inspiring Women in Design and Manufacturing

Inspiring Women in Design and Manufacturing’ speed dating careers’ with 160 students at St Mary’s Catholic College in Wallasey, near Liverpool, on 19 June 2014. 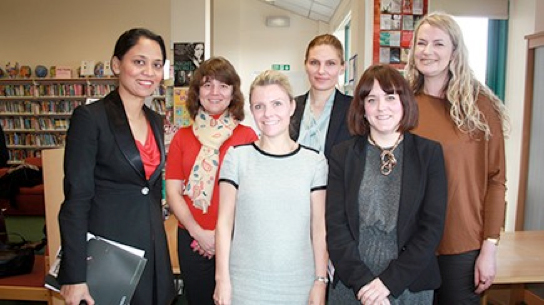 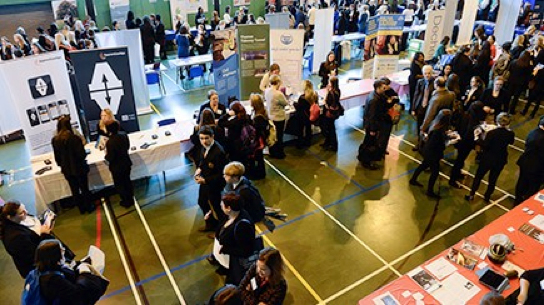 The campaign began with 10 women sharing their career insights with 100 girls. The high profile women who took part in the launch included:

The Guardian – Mum, what do engineers do? Article by Athene Donald one of the 10 ‘speed daters’.

The Telegraph – Move over Nick Clegg, your wife’s stealing the show

The Financial Times – One hour that could launch a lifetime

See photos from the launch event.