Aston Martin, Brompton Bicycle and the RAF – three iconic British brands – joined forces yesterday at a Primary Futures event to inspire and broaden the horizons of children about engineering.  Children from Broughton Fields Primary School in Milton Keynes met people doing a range of interesting jobs and were shown that engineering is open to all – regardless of gender, ethnicity or background.

‘A Celebration of Engineering’, was one of the last major events to take place in the Year of Engineering. It comprised of interactive, fun activities that saw the children exploring the many different elements of engineering to show them the vast options that are open to them.

The morning began with a ‘What’s My Line?’ assembly, which saw the children attempt to work out what six of the volunteers (two from each organisation) do for a living by asking them a series of questions. The children asked some fantastic questions, including “Do you use science in your job?” and “Do you wear a hard hat to work?”. This enjoyable and engaging activity has a serious underlying message. It challenges the occupation-related stereotypes that the children may have already started to form about who does certain jobs. By challenging these stereotypes, the activity broadens their horizons and helps to raise their aspirations. 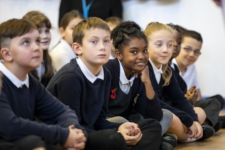 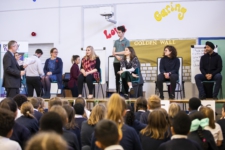 All Thirty volunteers then visited the children in their classrooms to talk to the children in small groups about their jobs. They rotated between groups so that the children had the opportunity to meet a range of people from different jobs. Many of the volunteers used exciting props to help explain what they do including parts from a Brompton bicycle, metal welding tools, models of cars and fabric from a car interior. The volunteers helped children to think more broadly about what they can do in the future and make the link between what they are learning now and future opportunities in engineering. Children were also excited to be able to explore three Aston Martin cars and Brompton fold-up bicycles and ask questions from the engineers who helped to make them. 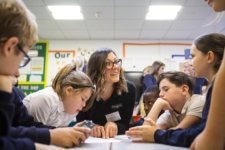 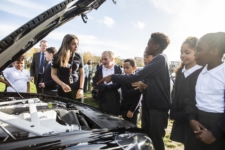 “All of us at Broughton Fields Primary School are determined to raise the aspirations of our children and to help them believe that all of life’s opportunities are attainable to them if they have the right attitude, drive and determination to succeed. For many children, working in engineering would seem to be out of their reach. Working with a forward-thinking organisation such as Primary Futures helps us to challenge that, and will hopefully inspire our children to have ambitions way beyond what they thought they could possibly achieve.”

We were also delighted to be joined by Stephen Metcalfe MP, HM Government Envoy for the Year of Engineering, at the event. Stephen commented: 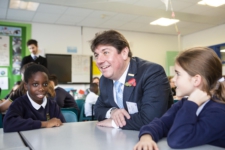 “Showing young people from all backgrounds what they could achieve as engineers is at the heart of the Year of Engineering, so it’s fantastic to see Primary Futures joining forces with inspiring role models to bring this to life for children. Engineers create, innovate and shape the world around us, but too many young people are in the dark about careers in the industry. By creating opportunities to meet real engineers from exciting organisations like Aston Martin, Brompton Bicycle and the RAF, initiatives like this are a vital way of helping children discover the amazing places their curiosity and imagination could take them.”

A huge thanks to all the volunteers from Aston Martin, Brompton Bicycle and the RAF:

‘Too often people forget that we still make things in the UK, not least the next generation. If we are going to flourish as an innovative, manufacturing nation then we must inspire those in our schools, wondering where their lives will take them and let them know what fun it is to create something through engineering. So with two other iconic British brands Aston Martin and the RAF we are supporting ‘Primary Futures’ a charity that brings people from the world of work into Primary Schools to inspire the next generation’.

‘The car industry has flourished in the UK, particularly in the luxury market British brands are especially strong. Our future success is dependent on getting talented young people interested in careers in engineering. We are proud to join Brompton Bicycles and the Royal Airforce as we motivate young people to look at what great British institutions can offer in terms of a career path’.

‘The Royal Air Force has a rich engineering history which is alive today supporting air capability around the world. As we look to develop the next generation of equipment, it is vital that we invest in our future engineers to help cultivate the skills and mind-set we and wider industry are looking for. ‘Primary Futures’ does exactly that: it captures the imagination of our young girls and boys and shows them the wealth of opportunities available. We are delighted to support this worthwhile charity’.

Nearly 3,500 primary schools across the country have signed up to Primary Futures which is run by the charity Education and Employers in partnership with the National Association of Head Teachers. It enables primary schools to connect with 45,000 volunteers from the world of work who inspire and motivate them to consider taking a path that they may not have thought possible because of preconceived assumptions shaped by their gender, ethnicity or social class.  Education and Employer’s Drawing the Future Report published earlier this year showed that children’s aspirations are often limited by what they see around them and who they know. Meeting workplace volunteers doing a wide range of jobs is a vital way to challenge these assumptions, get them thinking more broadly about what they could do in the future and make the link between what they learn at school and future jobs.